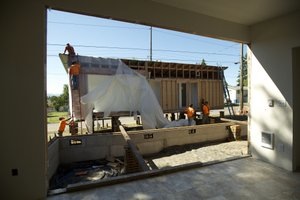 Posted at 06:05h in Newsletter by Geometry in Construction
0 Likes

Two sections of a modular home were rolled onto their foundation Monday, capping a yearlong partnership between the Vancouver-area Habitat for Humanity and two Evergreen district high schools.
The local nonprofit partnered with Mountain View and Evergreen high schools on the project. The work was done by students in a class called Math in Construction.
“Students can learn about geometry at the same time they learn about construction,” said Anita Jenks, who represented the school district in the agreement with Habitat for Humanity. “It’s not an apprenticeship; it’s an introduction” to construction.
As they work alongside Habitat for Humanity volunteers, “Our students have some wonderful role models,” Jenks said.
The home will be occupied by Nikki Danforth and her two sons. Danforth, a medical assistant, was working Monday and wasn’t able to watch her new home take shape. But her dad, Dan Price, was on hand to take photos and video, and he transmitted updates to her.
“It’s kind of surreal,” Danforth said later Monday after work.
“I’ve worked on all three sites,” she said: the back half of the house at Mountain View High, the front half of the house at Evergreen High and the property on the 3700 block of Lincoln Avenue. But as she spoke, Danforth still hadn’t made it down to the property to see everything in one place.
There still is work to do before the family moves in next month, said Josh Townsley, executive director of Evergreen Habitat for Humanity.
The three-bedroom house is about 1,100 square feet. It’s the 29th home built by Evergreen Habitat for Humanity, Townsley said. Funding came from the owners of the previous 28 Habitat homes, whose zero percent mortgage payments are rolled into new projects.
And one of those new projects will be another collaboration with high school students in the Evergreen district.
“The class is going now. We’re hoping to use the same plan,” Jenks said. That would give instructors a running start on the work, and they’d have a chance to amend an issue that popped up Monday.
“They forgot about crawl-space access,” Townsley said.
A workman corrected that Monday with a power saw.